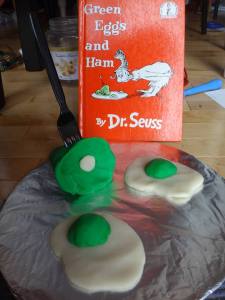 The next few weekends have a lot of action going on.  Here are some of the things we’re doing, what is keeping you busy?

September 7 we’ll be meeting at the (Update! Another update — CANCELLED DUE TO WEATHER) for our Green Eggs & Ham Storymob!  In the morning Jen will be helping out at the Ladies Learning Code Introduction to Drupal.

September 14 the kids and I will be returning to the Toronto School of Circus Arts for another exciting session of all things circus.

September 15 is the Ice Ride.  We’ll be participating in Toronto’s ride to help save the arctic.

September 21-22 is the Toronto Mini Maker Faire, and the Sunday has recently been announced as Family Day at the Faire, where families can go as a group and enjoy some activities as well as all the awesome makers and their creations (such as the ‘Mothra’ skis).

Friday mornings starting Sept 27 2013, at 10:30 for a half hour lesson, and then I’ve arranged a half hour of leisure time immediately after from 11 to 11:30 so the kids can stay in the pool, and the adults and young siblings can join in too.  During the lessons the adults can observe from the upper level open gallery.  For the final lesson, they will probably open up the water slide for the kids to use too, but normally it won’t be available for use.

Pricing is the City’s standard lesson fee, which is $68 for a nine week session (about $7.50 a class) (might be more expensive if you aren’t a Toronto resident).  For the extra half hour, we pay a ‘Guard Fee’ which is $15/week for the group.

They are willing to accommodate a variety of ages and a variety of levels, with a maximum of 15 kids (which would be 3 groups of 5 kids each).  If you have taken the city’s lessons before, they have their system of “Ultra Levels” in their “Learn to Swim” program, so please let me know which level your child(ren) is in and the pool will try to spread them out so those in similar levels will be in a group, if we have multiple groups.  If there is too large of a gap between levels it might not work out (e.g. four kids at levels 3-5 and one at level 9, or 3 at levels 1-2 and one at level 5).  Caveat: Since it’s during the day, the instructor won’t have the extra “Deck Attendants” you might be familiar with from evening or weekend lessons.

The upstairs space is fine for eating lunch in, and the library is right next door so you can make a day of it if you are traveling for the lessons too.