Thanks to a post by our friend Lisa, she  introduced us to the world of ‘stick bombs‘.  Think dominoes but with Popsicle, ahem, craft sticks.  Weaving them together to store up the energy under tension, you drop them, or in this case unleash them and away they go.  We did up a video showing it off and you probably just want to watch that, and only read on if you are ready to build your own. 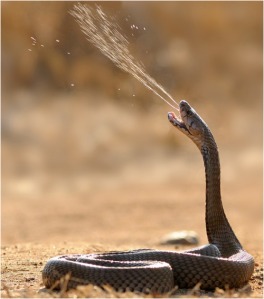 We had to acquire some wide, or jumbo, sticks as the smaller ones we had were just too stiff of a spring to do the ‘cobra weave’ style of stick bomb run.  Why is it called a cobra weave?  I’m guessing because it looks like a massive cobra snake is raising up out of the floor and spitting venom at you in the form of sticks.  It really is a sight to see.

If you’re going to try it yourself, get about 200 of the sticks (we had 225, but imagined using a box of 500, alas the local shop just had packs of 75) and give yourself an hour or two to get setup.  The hardest part is getting it started as all it wants to do it jump up at that point, and you need a bit of distance to get it settled.  We started with this instructable we found, but with the challenge of getting it started, and I was a little unsure it was loaded the right way (their video didn’t have a great cobra shape) I checked around and found a how to make a mini-cobra weave (who knew there is a more complex cobra weave too) by the domino dude which had you build some of the weave first, and then lock it off, instead of starting with the lock like the instructable did.  The kids were also anxious to see if it worked so after 50 sticks or so we set it off, and started again.  Warning, you might want to wear gloves of some sort as I found the wood really dehydrated the skin of my finger tips and if you’re really geeky protective eye wear.  There are smaller handheld weaves the kids can do too, this is what happened here as the repetition of building the long chain didn’t hold their interest the whole time.

Here are some photos of our progress as we went.  In the video he gives some special way to make a turn… I just grabbed it and twisted it a bit as needed, didn’t feel I needed to do anything special with the laying of the pattern.  Also, see how we added a bit of weight to the start of it, the lock was a tad slippy at first so I just stuck that on to keep it all in place until we were ready. 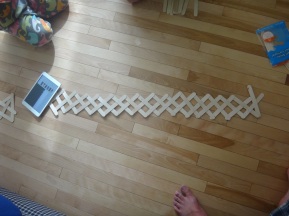 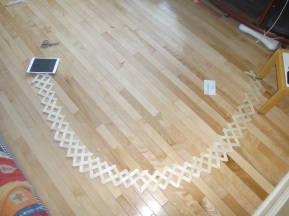 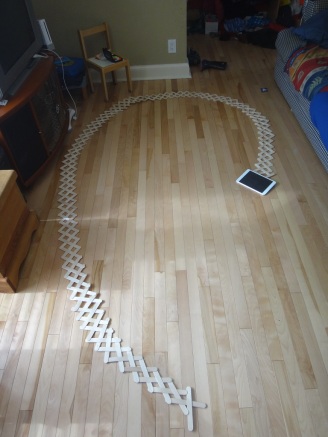 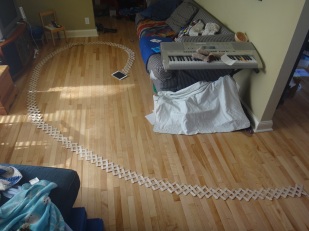 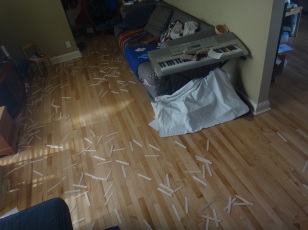 Oh, and some people will think it makes an incredible mess to clean up — it doesn’t.  The kids had the sticks put away in all of 3 minutes.  Have fun making your own.

I also tried a clip of just the ‘wow’ part of the video, but youtube’s slowmo logic seems pretty sloppy?  You can just jump to 45s into the main video instead of you’d like.

Check out some other Pajama Scientists videos too.

We started the week with some slightly crazed kids thanks to Halloween.

We also hadn’t gotten a lot of good video and me in my freaky tall blue creature halloween costume so we spent some time on the weekend putting it back on and trying things out.

Our circus school was closed last week so we missed our regular classes.  It didn’t stop my son, as I found these videos he took of himself practicing the silks.

We stepped in to Kimberly Jackson on Queen Monday after our drop-in and we saw some really nice handcrafted wooden tables that they are having a sale on atm. 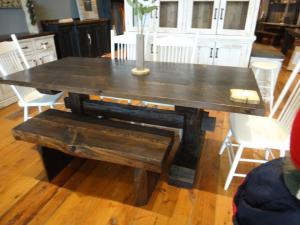 Tuesday I was trying to get the kids out of the house to play, but they just seemed to want to stay in.  We ended up building some bridges out of Kapla blocks (beam and cantilever), and then put it into practice as I became a human beam bridge, and my daughter was the load.

They got some exercise by playing on their homemade trapeze they have in their bedroom.

We did get out of the house in the afternoon though and started raking our leaves — mostly to have a pile to jump in, and a few to add to our compost.  Poor tree not getting fresh soil.

We discovered Richard Wiseman‘s Quirkology feed on Youtube and we proceeded to duplicate some of his puzzles and challenges.

Game wise we’ve been playing a lot of Mastermind. 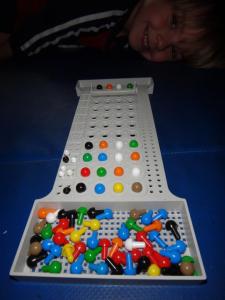 Thursday we headed down to The 90th Royal Agricultural Winter Fair.  We started out in the Spirit of the Horse area and watched the Toronto Police Mounted Unit, Elaine Ward demonstrate Western Style Dressage with her horse Maverick, and a Thoroughbred horse too.

We continued the horse theme as we ate our lunch in the Horse Palace watching some of the competitors for the horse jumping warm up.  My son spotted a horse he liked the look of and we followed them into the Ricoh Coliseum to see them compete.  It was Onisha and her driver, Olympian, Reed Kessler as they were competing in the Brickenden Trophy International Jumper Class.

The highlight of the Education Barn was the pig truck.  The kids watched, fascinated, as the dozen or so piglets nursed from their mother, and as the two, 6 week old (and much larger), pigs cuddled each other.

I’m always interested in the over-sized vegetables.  This year the corn-stalk was over 21 feet tall!

What did you do this week?

An interesting observation I made: we were barefoot (as we have been for months now), but instead of getting strange looks from people, instead many people thought that they too should shed their shoes while playing.  Goes to show you what preconceptions can do.