DynamO Théâtre‘s I on the sky is currently playing at Young People’s Theatre in Toronto with tickets still available for this weekend’s performances.

My kids and I saw the show today (they perform twice a day for school groups as well as the ticketed weekend shows) thanks to a Toronto4Kids contest win, and it was excellent.  An acrobatic trampolining energetic costume filled play without words that is also touching and heartfelt, not to mention laughter inducing.  If you can find the time to squeeze in the 60minute show, I recommend you do, you won’t be disappointed.  Side fact for my circus followers — two of the actors are former Cirque du Soleil performers.

The program suggests it for an audience of 10 years and up, and YPT suggests grades 3 to 7, but my 3 & 5 year old were engrossed completely.  There is conflict, and bullyish behaviour from the ‘thugs’ as I named them, plus some violence near the end from the ‘soliders‘ but it didn’t seem to register on the kids. 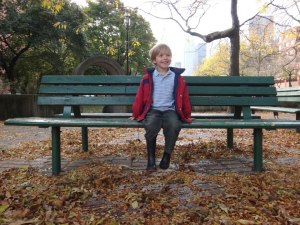 For an added bonus to your outing, after the show get a peameal bacon sandwich from St Lawrence Market and head a block south of the theatre to David Crombie Park and you can sit on a back to back green bench, almost like the ones in the show.  Minus the trampoline in the middle.

If you’re still not convinced, here is a video preview of the show.

Plus a special mention to ‘Jeff‘ for overruling the front of house staff’s aversion to my barefeet.

Have Something to Add? Cancel reply