I came across the above image posted at Babes at the Museum, and they were requesting to identify the people in the photo as of February 2012.  I decided to go on a bit of a hunt.

My conclusion is that the photo is the work of Charlotte Duberry, Nessa Norich, Jessica Hinds,  and Marina Lazzarotto and is an outtake shot during the rehearsal of commissioned performances at the Louvre, in front of Regnault’s The Three Graces (“Les Trois Grâces”)  on a Tuesday sometime in 2010.  An applicable title is “Mimesis in the Louvre”.

Now to document some of my search for those curious.

I started out using TinEye, as if it was an ‘official’ photo it was  good chance it would be registered over there (and I was curious if it would trigger on the painting in the background).  It returned 12 images, best guess being this post, but nothing official.   I found a post over at blended.fr that claimed the photo was part of lingerie company La fille d’O‘s advertising but couldn’t find anything corroborating that.  I found a blog post by Jim Harris over at Huffington Post about Facebook’s censorship of the image (what is art, vs what is porn? and many nice things said about the image), but again, no source information.

Next up was using Google Image Search.  This led me to the trove that is tumblr.  Its best guess was a post by Mr. Harris Tweed which he named “The Four Graces”, but then I was determined to try to find the first occurrence of the picture online.  Via this line of inquiry I found a nice article here asking where the line between classical beauty is and just plain sexy.  Using the date searches, leading back to the beginning of May 2011, I narrowed it down to this post at contraindicaciones which was the first I found listing some names of the participants: “Nessa Norich, Jessica Hinds, Charlotte Duberry, Marina Lazzarotto, Sofia Senna” (also this post at Girls Who Like Porno).   The earliest dated post I found was Feb 18, 2011 at murdermetonymy‘s tumblr, but again no source.  Having some names in hand, and the location known due to the background image (though many attributed it to Rubens or Rapheal instead of Regnault, and one even named it as the Graces from Botticelli’s Primavera) I tried to confirm things. 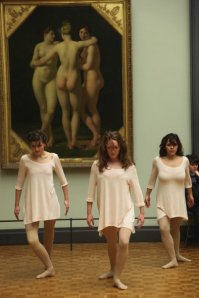 I found a website for Nessa Norich which listed in her ‘Devised Works’ section a project called “The Three Graces”.  There are images of a dance performed by three women in front of the painting.  It is still difficult to confirm the faces of the participants though.  Over on Marina Benitez Lazzarotto’s resume she too lists a theatre performance at the Louvre, so this connected four of the names I found from the other sites to the image’s location.

Finally I emailed my suspicions and received confirmation from Ms Benitez Lazzarotto that it was in fact a photo taken on her camera after hours while they were rehearsing for their respective shows. 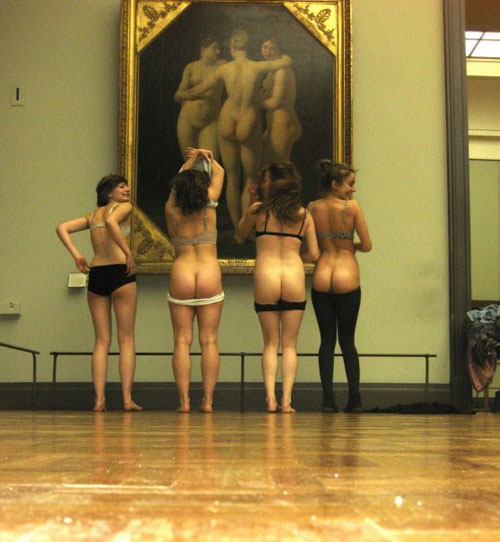 “The girls in the photo from left to right are:  Charlotte Dubery, Nessa Norich, Jessica Hinds and me.  The picture was taken with my camera which i put on a timer.  It was taken on a tuesday when the museum was closed and the three girls and i were rehearsing for Les Nocturnes du Louvre.” – Marina

So, there is a brief history of this meme.

And keeping it all current, if you like the talent Marina showed in creating this image, perhaps you’ll want to help her out making a movie?  Crowdsource her over at IndieGoGo for her film project FLASH.